Sporty and SUV don’t go together that often, especially in more mainstream auto companies. But since the introduction of the Mazda CX-5 in 2013, the option for those who wanted a family SUV with a bit of sporting credentials was pretty much the only option out there without going into the luxury brands. For the 2017 model year, Mazda gave the CX-5 a refreshed look both inside and out along with a few more convenience and safety features. 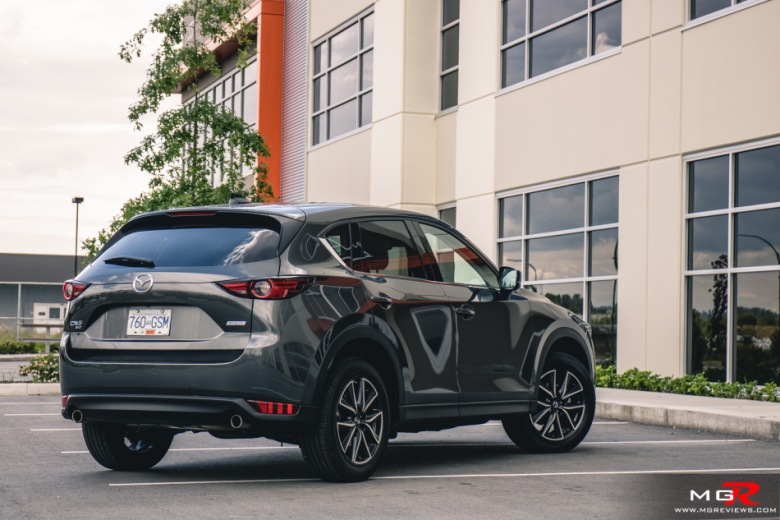 Engine – For a sporty SUV you’d expect the engine to be its strongest selling point but instead it’s the weak point of the Mazda CX-5. A 2.5L naturally aspirated 4 cylinder producing 187 hp and 185 lb-ft of torque, and this is the bigger of the two engine choices that are offered. Because this is a naturally aspirated engine whereas the competition have gone to turbocharging, the engine doesn’t give the kick in the back as turbo engines do. Peak torque is at 4,000 rpms which is too high by today’s standards. I’m not saying that it’s slow, it just doesn’t feel fast.

Braking – The way the CX-5 brakes is much better than the way it accelerates. Brake modulation is easy and a firm pedal provides good feedback.

Handling – The way the Mazda CX-5 goes around corners is what gives it its sporty credentials. Sharp and communicative steering provides feedback that you’d find a proper sports car let alone a midsize SUV. Because of this, the SUV gives you the confidence to drive it around corners at higher speeds than other SUVs. However the heavier steering does not go light enough at parking lot speeds which may make it a bit tiring maneuvering the CX-5 in a tight spot. It’s not awful but more steering assist could be useful.

Transmission – The 6-speed automatic transmission (a 6-speed manual is available on the base GX trim with a 2.0L engine) does a great job at shifting between the gears and under spirited driving, it feels almost like a twin-clutch unit rather than a traditional automatic. However a refinement of the programming software could make it better because it quickly wants to upshift to the top gear under light throttle and is hesitant to downshift until you bury your foot on the throttle pedal. The sport mode does make it more responsive but then it holds the revs for far too long.

Ride Comfort – Although it is aimed at being a sporty SUV, the ride comfort is not sacrificed too much. It does have a firmer ride than other SUVs like the Honda CR-V but it is comfortable enough to live with on a day to day basis. 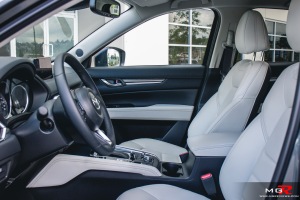 Noise, Vibration, & Harshness – Mazda’s engineers have done a fabulous job of insulating the cabin from outside noises and vibrations. It feels like an upscale interior that one would expect from a luxury German manufacturer rather than a mainstream Japanese manufacturer. Of course there is some noise intrusion from the wind and tires on highways and during heavy acceleration but but a quiet conversation can still be had inside without raising your voice.

Interior Design – As mentioned earlier, the cabin has a luxury feel thanks in part to the quietness but also the quality materials used. Leather and soft touch plastics (with a leatherette design and stitching) are the primary materials used. However the white leather may not be the wisest choice for colour in an SUV that is used to transport children. I think it’s fairly obvious why. The dashboard features physical buttons for the climate control and heated seats while the infotainment is controlled via the touchscreen or the physical knob & buttons next to the shifter.

Spaciousness – Although the Mazda CX-5 is considered a midsize SUV, it is smaller than the competition. Front occupants have plenty of room but rear occupants could do with more leg room. The trunk is equally small when compared to something like the Honda CR-V or Toyota Rav4 and the trunk floor is a bit higher than the two as well. The Mazda does have 40/20/40 flat folding rear seats so the cargo volume can increase to almost 1,700L.

Gadgets – Like most new crossovers the Mazda is available with a wide range of interior and safety features… for a price of course. The list is fairly long with adaptive cruise control, blind spot monitor, lane departure warning and keep assist, and so on. But there are some features that are missing but are found on the competition such as ventilated seats, a heated steering wheel with full 360 heating instead of just at the 9 and 3 positions, a panoramic sunroof, and Apple CarPlay and Android Auto to name a few.

Exterior Design – By far the biggest change to the 2017 model year of the CX-5 is the polarizing exterior design. The front fascia follows Mazda’s aggressive design look found on the CX-9 but it’s also designed to be safer in pedestrian collisions. The rear is reminiscent of the MX-5 but the overall shape has not changed since the 2013 introduction of the Mazda CX-5.

The Mazda CX-5 is not for everyone. The 2017 Honda CR-V is a better all-rounder for the family with more interior space and a supple ride. The CX-5 is for those that want to upgrade from the Mazda3  or other sporty hatchbacks to have a bit more room but without having to sacrifice the fun driving experience of a sporty car.

Thank you to Mazda Canada for providing the vehicle. www.Mazda.ca