With a higher driving position, more cargo capacity than a sedan, better fuel efficiency than a full size SUV, and all-wheel-drive capability, it’s no wonder that crossovers have become the fastest growing and most popular type of vehicles in the past decade. And usually at the top of the list of crossovers is the Mazda CX-5. Now as a 2016 model, it receives some mid-cycle updates to keep it competitive and at the top of the crossover market. 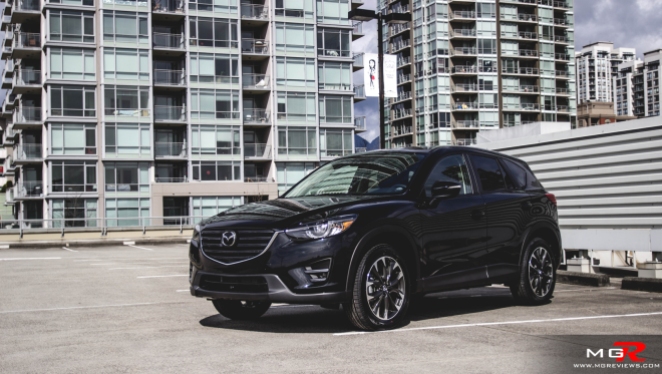 Performance – Since its introduction as a 2013 model, the powertrain of the Mazda CX-5 has seen little changes. The standard engine is a 2.0L Skyactiv inline-4 that produces 155hp and 150 lb-ft of torque. This GT model as tested is powered by a 2.5L Skyactiv inline-4 engine that is capable of producing 184hp and 185 lb-ft of torque. The only update to the 2016 engine is a slight improvement to the fuel economy which is now 9.8L/100km in a city and 7.9L/100km on a highway under the new 5-cycle fuel efficiency rating system. It’s also worth mentioning that the front-wheel-drive version of the CX-5 has slightly better fuel ratings in city and highway driving of 8.9 and 7.1 respectively. 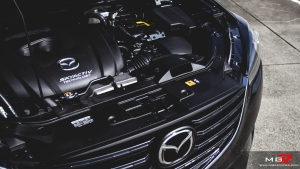 What really sets the Mazda CX-5 apart from all the other crossovers is the way it drives. While the engine may not be a powerful V6 or have a turbocharger bolted to it, it delivers enough power to satisfy most people’s needs. Mated to a very fast and smooth shifting 6-speed automatic transmission, the Mazda CX-5 feels agile, especially in Sport mode, where the throttle response is sharpened and each gear is held longer to allow the engine to be in its “sweet spot” to deliver instant torque and power. It also doesn’t take long for any driver to realize that the steering, suspension, and handling characteristics of the Mazda CX-5 are tuned for a more sportiness feeling. For the 2016 model year, the suspension has been tuned a bit to reduce body roll around corners. The tune-up has helped because taking corners in this 1600kg crossover feels stable and with the addition of all-wheel-drive, it further adds to the confidence of the driver to go around corners that much more quickly. The Mazda CX-5 will most likely be used as a commuter vehicle but if your commute takes you on twisty roads, there is quite a bit of fun to be had on the way to work. 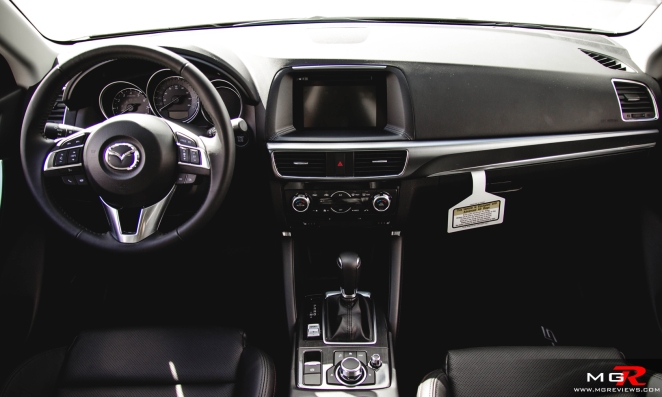 Comfort – For the 2016 mid-cycle refresh, Mazda has updated certain key areas of the interior. The biggest change is the 7” colour touchscreen display with the HMI Commander that is also found on the Mazda3 and Mazda6. As far as infotainment systems go, this system from Mazda is one of the easiest to learn quickly and use. The menu navigation system is set up in such a way that it feels intuitive to use and next to the controller on the center console, are quick access buttons for navigation, home screen, and music options along with a back button and volume control. Another change is to the instrumentation on the dashboard. The tachometer and speedometer are still the same but the gauge on the far right displays more information for the driver. My only dislike about the new gauge is that in certain conditions under direct sunlight it is difficult to see. And the last major change to the Mazda CX-5 is one that you cannot see but rather hear…. or not hear. Sound dampening has been improved over last year’s model which means less tire and wind noise intruding into the cabin area. 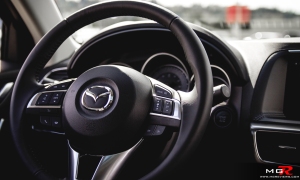 The rest of the cabin remains relatively unchanged. The seats still provide good comfort and now there is an option for pure white leather seating surfaces. In the back there is enough room for adults although adults that are taller may not want to be passengers in the back for a long time due to limited leg room. Cargo space is measured at 966L with the rear seats in the upright position and 1852L when the seats are folded which is average for a vehicle in this segment. 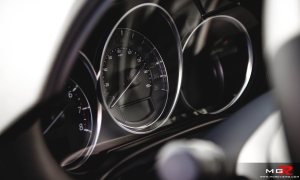 Odds and Ends – By far the biggest change to the 2016 Mazda CX-5 is the new technology package available on the GT model. In this package, the CX-5 is available with: SiriusXM satellite radio, SCBS, SBS, MRCC, FOW, HBC, and LDWS. Without getting into too much boring details as to what each of those acronyms stand for, the Mazda CX-5 can drive itself using radar guided cruise control and it will slowdown if the car ahead slows down. The CX-5 will also brake in an emergency at under 30km/h if a pedestrian or object crosses its path. In addition to these new systems, the Mazda CX-5 can also be equipped with lane departure warnings and blind spot monitoring. Basically, the Mazda CX-5 can now almost drive itself and react in an emergency faster than the driver can. These same systems have been available on luxury vehicles for half a decade but now they are trickling down to more mainstream vehicles that cost $10,000 – $30,000 less. 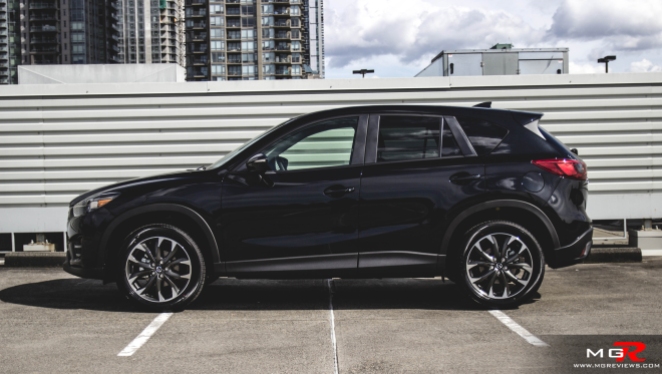 Overall the changes to the 2016 Mazda CX-5 have helped it stay competitive in an automotive segment that is becoming more and more crowded as the years go on. It offers almost sedan-like driving dynamics with a higher driving position and interior space and comfort of a small SUV.

Thank you to West Coast Mazda for providing the vehicle and visit their website to view this and other vehicles that are available for purchase or lease. www.WestCoastMazda.com