Since its introduction in 1948, the Ford F-150 has not only been the best selling pick-up truck in the world but one of the best selling vehicle as well beating out vehicles such as the Volkswagen Beetle, Honda Civic, and Volkswagen Golf. For the 2015 model year, Ford introduced the 13th generation of the F-Series and took drastic measures to make the new truck in-tune with the modern times. 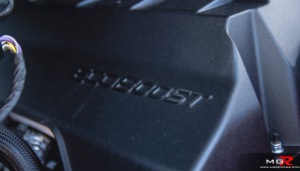 Most diehard fans of pick-up trucks will look at the range of V6 engines and will laugh at anyone who buys one over the V8. But the 3.5L V6 can tow 500kg more than the V8 engine and this new 2.7L V6 is no slouch either. By comparison this “miniscule” engine can tow 3,856kg, achieve a 0-100km/h time in around 6 seconds (which is enough to scare some sports cars), and it can achieve a fuel economy rating of 10.9 L/100km on a combined cycle. It is remarkable how much performance Ford’s engineers managed to squeeze out of such a small displacement engine.

But the new engine is not the only major change for the new Ford F-150. The body and frame have been constructed out of lighter but stronger materials to help improve fuel economy, towing, and performance. The cab and bed are now made out of aluminum body panels, with the exception of the firewall which is still steel, and the frame features less steel to reduce the weight but more use of high tensile steel for improved rigidity. Overall the weight savings are up to 300+kg on the larger sized F-150s.

In terms of how it actually feels to drive on the road, it is very good. For a pick-up truck the steering feels direct and responsive and the whole truck feels stable at speed. Going 100km/h on a highway feels more like you’re doing 60km/h with hardly any tire or wind noise intruding into the cabin. There is also a lot of braking force when you stomp on the left pedal. In fact, it may catch some people off guard when they first depress the brake pedal due to the excellent initial bite of the brake pads. The overall package of the lighter body, stronger brakes, and powerful engine prove to be a good combination for the new F-150 as it doesn’t feel so much like you’re driving a full-sized pick-up truck but rather a high riding crossover or sedan.

Comfort – These days, pick-ups are not used just for hauling things around anymore. They also pick up the groceries, pick up the kids from school, and commute to the center of the city on a daily basis on the way to work. The spartan interiors of the older days are gone and now pick-up trucks have an interior that is on par with premium sedans. In the F-150, leather upholstery is available on the higher trimmed models along with multi-adjustable power seats. Most trim levels have soft leather center consoles and wrapped steering wheels that give the truck a feeling of quality and comfort. Space in the front seats is more than abundant for anyone and space in the back of this Supercab XLT model is plentiful even for adults. Getting in and out of the F-150 is a breeze in the Supercab model thanks to the rear doors that open at 170° and a flat floor inside the cabin. The design of the cabin features a lot of chamfered edges that reflect the exterior look of the Ford F-150. There are physical buttons and knobs for the most used controls, such as climate, and the F-150 also comes equipped with the same Sync system that is found throughout the Ford model range.

The Ford Sync system is however not the only piece of modern gadget in the new Ford F-150. It can also be equipped with blind side monitoring, adaptive cruise control, satellite radio, voice-activated navigation, 360° camera system, and reverse sensing system.

Odds and Ends – Ford’s engineers went to a lot of lengths to develop the new 2015 Ford F-150. Perhaps one of the biggest was putting a prototype 2015 F-150 disguised as a 2014 model in the grueling Baja 1000 rally. During development, the engineers used the new high tensile steel frame and aluminum body along with the new 2.7L EcoBoost V6 engine in the rally to see what areas of the new truck would need further development before entering production. Not only did the truck finish the rally but the only part that needed replacement was an air filter. This test goes to show the durability of the new frame and aluminum body along with the robust 2.7L V6 engine.

It’s incredible at how quickly pick-up trucks have come in terms of fuel efficiency and interior comfort. A decade ago, they still felt like they belonged on a farm but now the new Ford F-150 proves that it can be used literally anywhere on the planet.