This car is electrifying. This car is shocking. Ok, enough of the electrical related bad puns but in all seriousness, this is a car like no other. 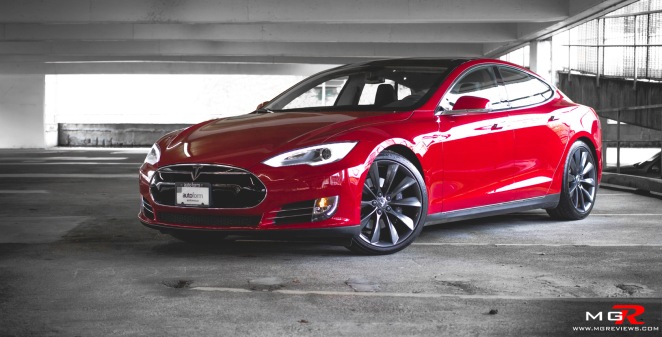 Performance – As fossil fuels get used up, more and more auto manufacturers are looking for an alternative means of powering their vehicles. Tesla has decided to take the pure electricity route. This P85 model is powered by an 85kWh motor producing 416hp and is mated to a 1-speed transmission. Although the transmission only has one gear, it is still capable of launching the model S to a top speed of 210km/h, more than enough for a city dweller. Speaking of launching, the acceleration of this car is incomprehensible because the electric motor provides all of its power as soon as you touch the gas pedal. Whether you’re at a stop light or cruising on the highway wanting to overtake a car, power is always available and always instant. 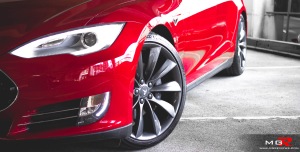 Unfortunately, the handling performance of this car is not quite as good as the straight line performance. Although the steering can be adjusted for different weight feelings, it still feels far too numb to have any sort of pleasurable effect on the driving experience. Also the nearly 2000kg weight of the car, due to the batteries, can really be felt as it leans from side to side during fast cornering. The suspension can be adjusted for a firmer ride but it doesn’t help the cornering capabilities of this car very much. 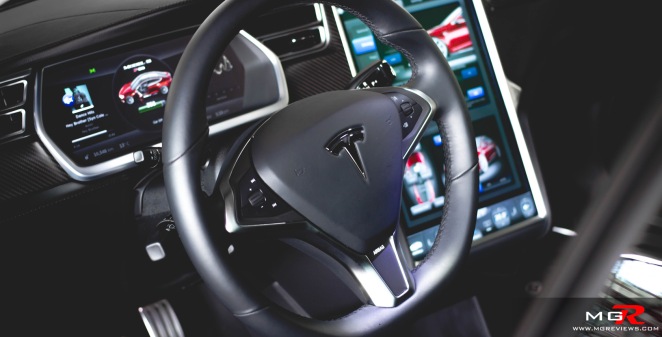 Comfort – Because the Model S doesn’t have a traditional engine, the cabin is eerily quiet. Every time the speed builds up, you expect some noise to come from the car that’s associated with the acceleration but there isn’t any. The only noise that is emitted is either the stereo system (if it’s on) or a little bit of tire and wind noise at highway cruising speeds. 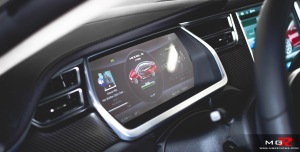 Another benefit to not having a traditional fossil fuel engine is the amount of extra space that’s available. The batteries are situated in the floor and the electric motor is where a traditional fuel tank would be. This means that not only is there a big trunk in the back but also a decently sized trunk in the front of the Tesla. Also, because there is no drive shaft or exhaust pipes to go to the back, the floor is flat and leg room is abundant for all occupants. 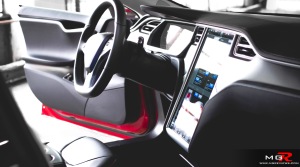 The design of the interior is like it’s from a sci-fi movie. Smooth flowing lines create interesting shapes on the door panels and along the dash. The instrument cluster is made up of a single large screen that displays the range and power consumption. The center console is basically a giant iPad. Apart from the drive selector, wipers, and lights every aspect of the car is controlled through this screen. Ride height, steering feel, sunroof, stereo, navigation, and even the internet can be accessed through this one screen. The only drawback is that just like any other shiny glass surface, it quickly becomes covered in fingerprints. 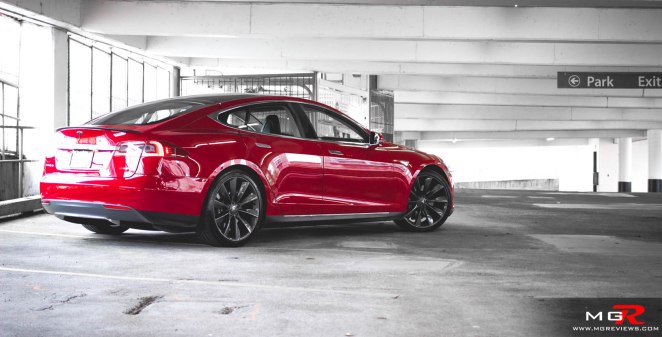 Odds and Ends – The exterior shape of the Tesla was designed not only to look good but also to reduce drag and wind noise. The design stands out compared to other sedans but that’s mostly due to the fact that this is not like any other sedan on the sale today. One really cool feature is the door handle. When the car is locked or moving, the handles retract into the doors but just a gentle swipe of your fingers and they immediately pop out to let you open the door. 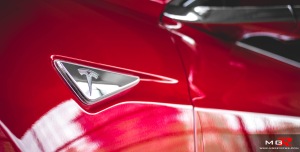 While on surface it may seem that a pure electric car is the future of automobiles, in my opinion it has one major problem and that is “Range anxiety”. This term is synonymous with the electric car because there is a limited range that a car of this type can travel before it needs a recharge. However recharging an electric car does not take 5 minutes like how it takes to fuel up a traditional gasoline car. It usually takes anywhere from 4-8 hours to fully recharge so trips longer than ~350-400km will take a lot longer than they would in a gasoline vehicle. Tesla has created a “Supercharging station” which can charge the Model S from dead to full in ~45 minutes but these stations are not as readily available as a gas station.

I’m sure there are scientists out there working on new batteries that charge in minutes and last for thousands of kilometers but until that day comes, driving long distances in an electric car feels like it is a restriction of exploration and discovering new and interesting places.

Thank you to Autoform Performance Inc. for providing this vehicle.