The sedan is arguably the most popular type of vehicle in the world and while there have been thousands of different models, one thing remains certain. Germany is still king of the sedans. No other manufacturer in any other country can match the luxury, performance, and prestige that German sedans are known for world wide. And it seems like they have done it again with the 5th generation of the iconic Audi S4.

Performance – From the very beginning, the Audi S4 has had a tough time deciding what engine it wants to keep under its hood. The Americans have the V8, the Japanese have the turbocharged inline-4, but the S4 has had a turbocharged inline-5, a twin-turbocharged V6, a naturally aspirated V8, and now a supercharged V6. In any case, the power figures have been slowly climbing over the years until it plateaued with the new supercharged V6. The new engine produces 333hp, 7 less than the old V8, and 325 lb-ft of torque, 23 more than the V8. However, this particular S4 has a few extras to bump up the power figures to approximately 430hp and 400 lb-ft of torque. For $2,000 worth of ECU tuning and a supercharger pulley kit, this Audi S4 that was designed to compete with the BMW 335i, can now compete and outperform the iconic BMW M3. Coupled with Audi’s legendary Quattro all-wheel-drive system, this S4 makes you feel like you’re getting shout out of a cannon when the lights turn green… at the drag strip of course. Despite the monumental power from the relatively small 3.0L engine, it is still easy to drive on a daily basis and even has a good fuel economy rating. This car is also equipped with a Milltek Sport Performance exhaust system that lets you hear the growl of the V6 along with a little “burble” noise every time the quick shifting 7-speed dual clutch transmission shifts up.

Getting around corners in the Audi S4 is efficient, precise, and uneventful. The Quattro system and the electronic stability control program do not allow for any sort of powersliding as you would find in a rear-wheel-drive only car. The steering is sharp when you turn into a corner and all four tires grip as you exit a corner. As you probably have noticed in the pictures by now, this S4 also has new suspension fitted to it. The suspension comes from KW and they are the Variant 3 coilovers. The lowered ride height and stiffer springs and shocks do help the S4 in corners but having such a low vehicle around a city means that you will be scraping the underside of the vehicle on every speed bump and at every abrupt gradient change.

Comfort – My first thought when I saw the lowered ride height was “Oh no, my spine is going to break when I drive over a bump.” But to my surprise the suspension is relatively comfortable. Obviously it doesn’t feel like a Range Rover but it’s not a Lotus Elise either. Further adding to the comfort are the seats which provide good padding for your back but also great lateral support for the fast corners. In the back however space is a little tight for taller adults but for taking the kids to and from school won’t be an issue.

Audi has lately been on a roll when it comes to the design of the interior. As per German standards, leather is the primary material that you first notice on the seats, steering wheel, and shifter. The fit and finish is superb with all of the buttons having a robust feel to them. And finally, the look of the dashboard and center console is both elegant and a bit sporty with the push button start situated next to the shifter and the sculpted steering wheel. 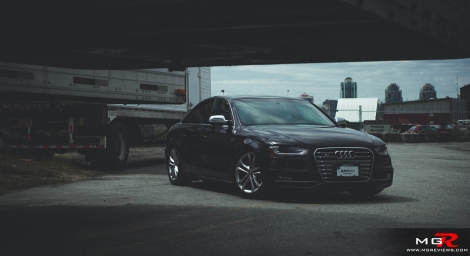 Odds and Ends – While the interior may look sporty and induce some excitement, the exterior of the Audi S4 does not. Apart from the quad exhaust and “S4” badges, it looks identical to a regular Audi A4. Or for that matter the A6. It doesn’t have any of the flared wheel arches or gills in the bumper or massive brake calipers as the old RS4 had. It looks subtle and discrete and to some it’s what they want but to others like myself, I’d want people to know that this is not an ordinary A4 that a neighbour also might have.

Overall I enjoyed this car more than I expected myself to. It is monumentally fast and still fantastic to drive on a daily basis around town but I just wish that the Audi designers would have spent a bit more time making the S4 look different than the base model A4.

Thank you to Autoform Performance Inc. for providing the car.