Hydrogen fuel is a ticking time bomb. At least that’s the perception of most people in the last century. But they also said that about gasoline when gas powered vehicles appeared. And yet they’re everywhere you look. Hydrogen fuel celled vehicles are not new but with the eventual shortage of fossil fuels, alternative fuels are making a come back. Hyundai is among a small handful of manufacturers investing in making hydrogen fuel celled vehicles accessible to the masses with the all-new 2019 Hyundai Nexo. 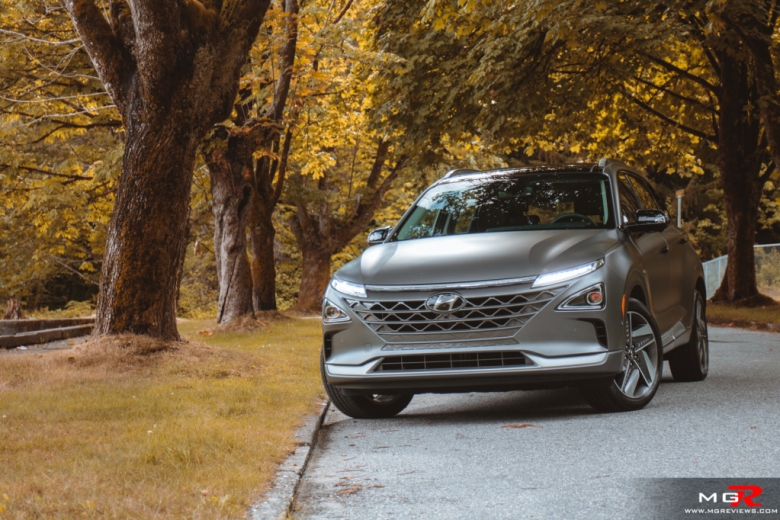 Motor – Driving the front wheels is a single motor that can produce 161 hp and 291 lb-ft of torque. Pretty standard horsepower and torque figures for what is primarily a city crossover vehicle. Being an electric motor, torque is instantaneous regardless of what speed the Nexo is doing. 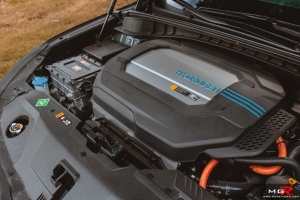 Fuel Cell & Battery – The fuel cell under the hood takes hydrogen from 3 separate fuel tanks to combine it with oxygen in the atmosphere to produce electricity and water. The electricity gets sent directly to the motor or to a 1.56 kWh battery pack which then powers the electric motor. As for the water, that goes out the tailpipe and into the atmosphere. There’s also a submenu in the infotainment system which tells you how much air the Nexo purified while you were driving it, just to make you feel better about saving the environment.

Hyundai claim a total range of 570 km under ideal conditions but in the real world it’s more like 540-ish km. But even so that’s a good range and refuelling takes less than 5 minutes. The problem is finding a hydrogen fueling station because they are more scarce than level 3 charging stations. This is why the 2019 Hyundai Nexo is only available in certain markets around the world. 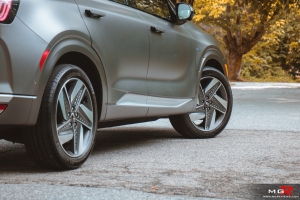 Braking – Like many other hybrid and electric vehicles, the Hyundai Nexo uses regenerative braking to recover some energy when slowing down. The switch between regenerative braking and normal friction braking is pretty much seamless in everyday driving conditions. As well as many other crossovers, the Nexo is equipped with forward collision alert and emergency automatic braking.

Handling – With a weight of over 1,800 kg, the Nexo is not light on its tires. The weight can be felt around a corner if you take it too quickly. But the majority of that weight is low for a better center of gravity. The Nexo was never meant to be as sporty as the Mazda CX-5 but rather just a practical city crossover and it drives like a normal electric CUV. 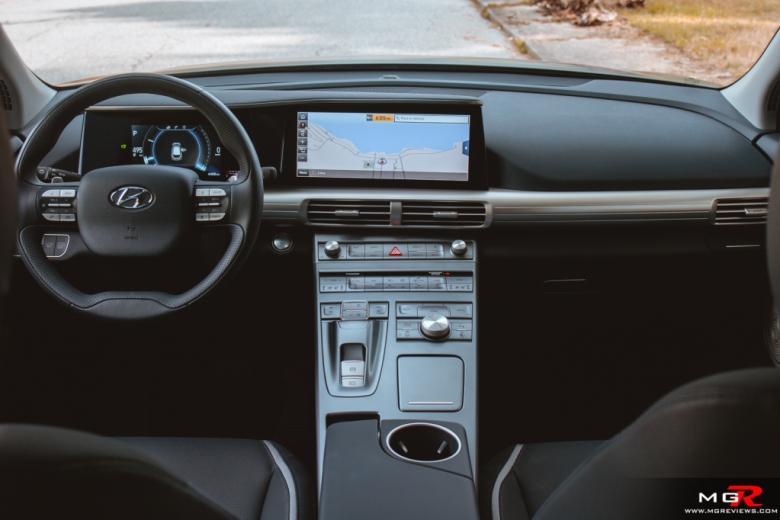 Ride Comfort – The suspension is soft and able to absorb whatever city streets have to throw at it. It doesn’t feel floaty either which is good for highway travel as well. The seats are a little bit on the firm side but even after driving for an hour or so, I didn’t have any back or butt pain. 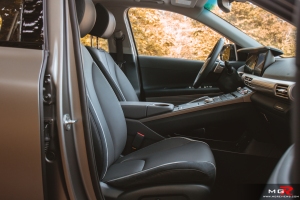 Interior Space – This being a crossover, there is a lot of space for front occupants. Leg room is plentiful and head room is abundant. Rear occupants also have quite a bit of space. At 6’4”, my legs fit snugly behind my driving position. Head room is just as plentiful in the back seats as the front and the rear backrest can recline. Trunk space however is small due to the raised floor. Pull up the floor cover and there’s only a couple of small item storage spaces because beneath them are the hydrogen fuel tanks.

Noise, Vibration, & Harshness – Just like many other electric vehicles, the Hyundai Nexo is quiet in everyday driving situations. Wind and road noise are minimal whether on city streets or on a highway. The only unique sound that the Nexo produces is when you have the accelerator pedal floored and the fuel cells produce a fizzing noise as they try to convert as much hydrogen and oxygen into electricity & water. 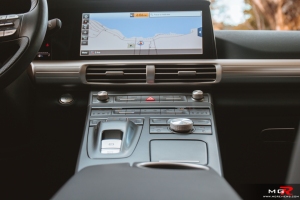 Interior Design – The Nexo has an interior design that is unlike any other Hyundai vehicle at the moment. It does use a few of the same switches and buttons but the layout of the center console is almost like the captain’s chair on the USS Enterprise.

Information is displayed on a 12.3” touchscreen and a smaller driver display but the area around the driver display screen could have been better utilized. An interesting design touch on the interior is the two spoke steering wheel instead of the usual 3 spokes. Overall the interior of the Nexo looks modern and borderline futuristic with the center console. 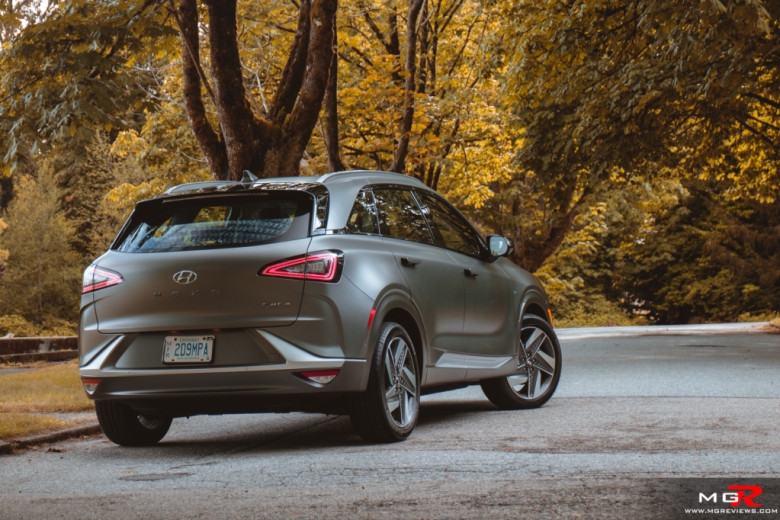 Gadgets – Apart from the fuel cell under the hood, there’s nothing else that the Hyundai Nexo has that other vehicles don’t. Navigation, Apple CarPlay & Android Auto compatibility, blind spot sensors, adaptive cruise control, lane keep aid, and so on are equipped on the Nexo. The infotainment system though is different than other Hyundai vehicles and fully utilizes the widescreen aspect ratio of the touchscreen. At first it may feel daunting to use for some but after a few minutes of playing around with all the features of the infotainment, it becomes just as easy to use as other Hyundai infotainment systems. 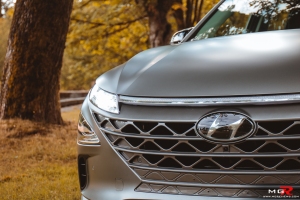 Exterior Design – The futuristic-like design of the interior extends to the exterior as the Nexo looks like no other Hyundai vehicle. It does have a few similar design cues like the shape of the grille and the LED daytime running lights, but overall it looks are of its own. One thing I personally could do without is the matte paint finish because it is very difficult to keep clean and it cannot be washed in the same manner as normal paint.

There’s no doubt that hydrogen fuel celled vehicles are the future when fossil fuels run out. Battery technology is constantly improving but it still takes hours to fully charge a vehicle from 0% charge. Hydrogen fuel cell vehicles make the job of refueling similar to what everyone is already used to. The only drawbacks at this moment are the price of vehicles, ($74,905 CAD starting price for this 2019 Hyundai Nexo) lack of hydrogen fueling stations, and an energy efficient way of producing hydrogen fuel. But eventually those obstacles will be things of the past and Hyundai will be among the first to usher in a new era of vehicles.

Thank you to Hyundai Canada for providing the vehicle. www.HyundaiCanada.com