Yes, this Jaguar has a turbocharged inline-4 cylinder engine. But is that such a bad thing?

Engine – To be brutally honest from a performance perspective, this car should not have this engine. But there’s more to this car than just the engine, more on that later. The 2.0L turbo inline-4 produces 296 hp and 295 lb-ft of torque at 5,500 and 1,500 rpms respectively. For the engine alone, those are impressive numbers. But it has to move a car that tips the scales at 1,545 kg which is a lot for a 2 seater sports car. Jaguar claim a 0-100 km/h time of 5.7 seconds but that’s roughly around the same time as the 2019 Mazda MX-5 which weighs 500 kg less. The weight of the F-Type P300 is this engine’s Achilles heel. 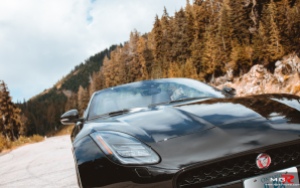 But it does have some positives such as surprisingly good fuel economy. During my week of driving and putting nearly 400 km on it, I managed a mostly city fuel efficiency rating of 10.5 L/100km. The little engine also produces a lot of torque at low rpms so setting off from stops and overtaking on a highway require little throttle input from your right foot.

Transmission – An 8-speed ZF automatic is the only transmission of choice with the 2.0L engine. It’s not as fast at shifting through the gears as a dual-clutch transmission is but for this type of car it gets the job done. Upshifts and downshifts are smooth if you leave the transmission in normal “D” mode. In “S” mode with the engine in Dynamic mode, the 8-speed auto reacts fairly quickly to driver inputs via the gear selector or steering wheel mounted paddles but downshifts could be smoother.

Braking – You don’t get the option of having carbon ceramic brakes like on the F-Type SVR, but strangely you do have the option of getting 380mm front brakes (standard is 350mm as equipped) at no additional cost. But even so, the standard brakes provide more than enough stopping power on city streets. They are a bit on the sensitive side but after awhile you get use to them.

Handling – One big positive of having such a small engine under the hood is that there is less weight over the front axle. This improves steering response and handling. The Jaguar has a lot of grip mainly due to the massive tires that are optioned. 255 section wide on the front and 295 section wide on the rear. You have to try incredibly hard to make the F-type P300 lose traction in the rear with such wide tires. If you push it too hard into a corner, the car will understeer but if you’re gentle, it feels agile and will grip like how a Jaguar should. 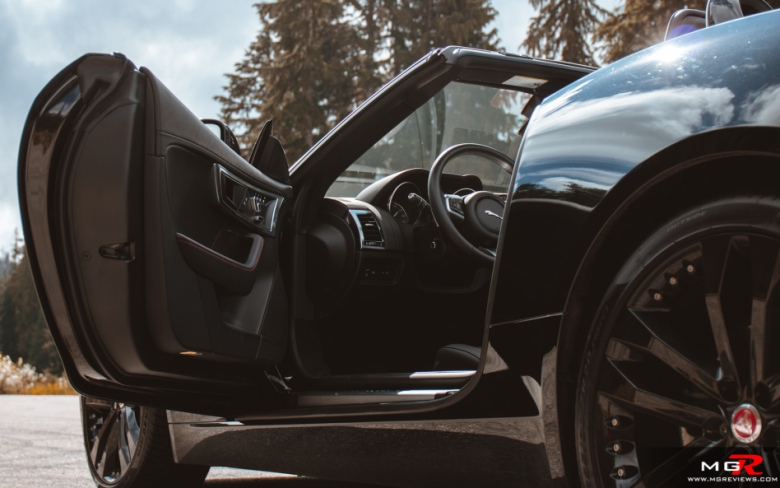 Ride Comfort – Unlike the AWD versions of the F-Type, the P300 does not get the adaptive suspension. Despite this, the ride is still a little on the firm side but not as harsh as the V8 SVR. So as long as you avoid big potholes, the F-Type P300 is good enough to be used as a daily commuter car. The seats are just as spacious as on the SVR and offer good support when driving enthusiastically. Leg and headroom are good even if you’re 6’5” and trunk space is decent by convertible standards.

Noise, Vibration, & Harshness – This being a sporty Jaguar, the engineers have given the engine a louder than normal exhaust note. In my opinion this engine sounds best when accelerating between 2,500 and 4,400 rpms. It has a 4 cylinder burble with a faint hiss of a turbocharger sucking in air. When upshifting or letting off the throttle at higher rpms, it doesn’t pop and crackle like the SVR but it does have a rapid succession of 4 pops. And it does this all the time like clockwork. Unfortunately, most of the sound that the engine makes (apart from the pops) is fake when activating the Active Exhaust System. The only reason why the engine sounds louder is because the noise is coming through the stereo system.

Apart from the exhaust, this being a convertible quite a bit of wind noise makes its way into the cabin. Surprisingly though, it’s much quieter with the roof up than I expected.

Interior Design – Apart from the different materials used throughout the cabin, it looks pretty much the same as any other F-Type. This being a more budget F-Type, the center and side arm rests are not as soft as on the SVR and doesn’t feature the same quilted leather pattern on the seats. But even so it’s still a nice place to be in.

Gadgets – The 2019 Jaguar F-Type P300 Convertible starts at $72,500 CAD and for that you get emergency automatic braking, lane departure warning, navigation (with a new larger infotainment touch screen), LED headlights, and that’s about it. Well not really but those are the big ones. If you want things like heated seats, blind spot sensors, dual zone climate control, and keyless entry, you have to option out your F-Type. As this demo sits, it’s around $87,000 CAD.

Exterior Design – Apart from the central exhaust, the P300 badge, and minute changes to the front bumper and hood, it’s hard to tell to the untrained eye that this F-Type only has a turbo 4-cylinder engine. Unlike the F-Type SVR with its yellow brake calipers and sky blue paint, this P300 looks elegant with the top up or down. It looks particularly good when following one and you notice how wide the stance is and the rear fenders that look like a woman’s hips. The car is very well proportioned and looks stunning in any environment.

If outright performance is what you’re after from a sports car, then the Corvette Stingray, Porsche 718 and even the wholesome Mazda MX-5 are better options. At $69,500 CAD for the coupe and $72,500 CAD for the convertible, it’s hard to recommend the Jaguar F-Type P300 from a performance perspective. But you can’t ignore it for its responsive handling, luxurious cabin, and sex appeal design.

Thank you to Jaguar Canada for providing the vehicle. www.Jaguar.ca