Jaguar these days is owned by Land Rover (or is it the other way around?). Regardless, it was only a matter of time before Jaguar followed their sister company and made luxury SUVs as well. The F-Pace sits on the same chassis as the Range Rover Velar but has a different engine, different looks, and a different driving dynamic. 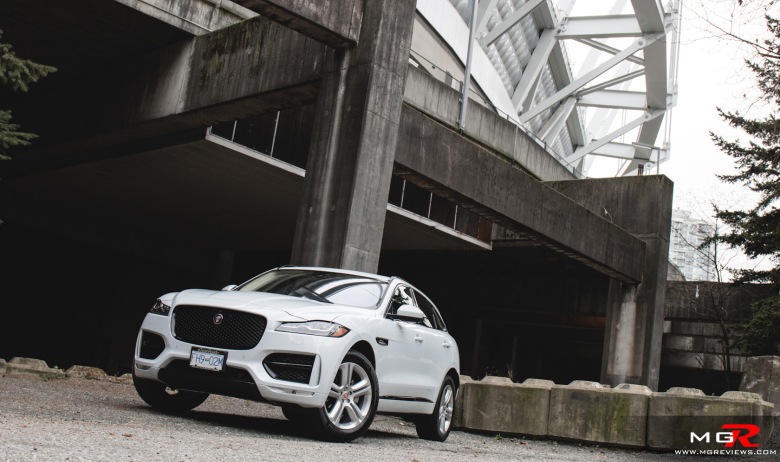 Engine – This big cat gets powered by a 2.0L turbocharged 4-cylinder (why the badge says 25t is a mystery to me though) and in this R-Sport trim it produces 247hp and 269 lb-ft of torque. For the Jag’s size, this little engine does a pretty good job of getting it off the line. It’s not the supercharged V6 of the Velar with 350+ hp but for the price and fuel efficiency, it’s more than enough for most buyers. This engine is rated at 10.7L/100km in a city and 8.8L/100km on a highway which is surprisingly low for a 1.7 Tonne SUV. In real life, the best I managed was approximately 12.5L/100km that involved mostly city driving. Jaguar also offers a diesel engine with the F-pace that is said to return up to 7.2L/100km on a highway. So if you are extremely conscious about the amount of fuel you use, the diesel is the engine choice for you.

Transmission – An 8-speed ZF automatic is the transmission of choice for the Jaguar F-Pace. The German manufacturer, ZF, knows how to build good transmissions and there are no complaints of this particular one in the Jag. smooth and quick shifts both when in normal driving mode or in sport mode. Plus the rising gear selector when the engine starts is always an amusing feature.

Brakes – Because the F-Pace is lighter than the Velar, braking feels more urgent in the Jaguar than in the Range Rover. There is a strong initial brake bite but beyond that it’s easy to modulate the brake so that the F-Pace doesn’t stop so quickly that vehicles behind it end up hitting it. 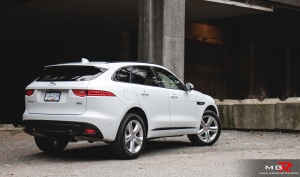 Handling – Let’s face it, I’m sure Jaguar wanted the F-Pace to be sporty like the F-Type Coupe but SUVs will never be as fun to drive as a proper sports car. Having said that, the F-Pace is better to drive than it’s bigger sister, the Velar. Less weight means less momentum around corners which means less understeer and more control. The steering feedback is nowhere near as good as other Jaguar vehicles like the XKR-S or XFR but it does feel precise and quick to respond to inputs from the driver.

Ride Comfort – This does not have the air suspension of other Range Rover models but the suspension is electronically adjustable via the touchscreen. In it’s normal mode, it soaks up modest bumps with little effort but larger bumps do tend to jiggle the SUV a bit. In Sport mode, you feel a lot more of the road imperfections. But keep it off of Sport mode in the city and it will feel just like how a luxury SUV should feel, smooth. The front seats are firm but not to the extent of feeling like you’re sitting on a rock. They of course have multiple electronic adjustments and provide enough support for long waits in city rush hour traffic. Rear occupants that are taller than the average person will find it tight in terms of leg room.

Noise, Vibration, & Harshness – This being a luxury SUV with a luxury price tag, one would expect it to have a church like interior when it comes to noise. The interior noise is not too bad but it’s not as quiet as you’d expect from a luxury SUV. You get a better sense of isolation in the Velar rather than this F-Pace.

Interior Design – I don’t know whose idea it was to have a grey interior with green stitching and blue ambient lighting but it is one of the worst colour combinations on a luxury vehicle that I’ve seen in a long time. But ignoring the hideous colour combination (you can opt for a black interior), the rest of the cabin is typical Jaguar with a mix of physical buttons and touchscreen controls. My only complaint is why the controls for the heated seats have to be controlled from the touchscreen rather than having their own set of buttons?

Gadgets – The Jaguar F-Pace is similarly equipped with features that can be found in the Range Rover Velar such as adaptive cruise control, lane departure warning, emergency automatic braking, and so on. For the most part all of these electronic safety aids works great on highways and city roads. However this particular Jaguar is missing things like a 360 degree camera system or massaging seats. I should rephrase that last one. It does have a 360 camera system but for some reason you can’t use it when you’re in reverse?? But anyway the standard backup camera is very clear and looks great on the landscape style touchscreen.

Exterior Design – The 2018 Jaguar F-Pace looks much better on the outside than the inside. It does take some styling cues from the F-Type Coupe with the taillights and the side fender accents. My only complaint, and it’s a small complaint, are the exhaust pipes. They’re just too close together. I think they would’ve looked better if they were either further apart or right next to each other in the center like the F-Type V6 exhaust pipes.

Overall the 2018 Jaguar F-Pace 25t R-Sport is a great driving SUV for its size and when people see it, they’ll think you’re doing well in life. However you do need to be doing well in life to be able to afford one because this R-Sport trim with the 25t engine and the options on this test vehicle cost $72,000 CAD.

Thank you to Jaguar Canada for providing the vehicle. www.Jaguar.ca