Compact SUVs are the new trend in the auto industry with the Mazda CX-3, Toyota C-HR, and Honda HR-V. But this trend started with the Buick Encore and now in its second generation, it sees improvements in its styling and comfort.

Performance – There is only one engine to choose from. A 1.4L turbocharged 4 cylinder. But there is a choice of how much power you can get. Lower trim models of the Encore produce 138hp and 148 lb-ft of torque. Don’t expect to go anywhere very quickly because the power is underwhelming. Peak torque is below 2000 rpms and it gets off the line with enough pep but 138hp just isn’t enough to make it an enjoyable drive. Higher trim models get a bump in power to 153hp and 177 lb-ft of torque without sacrificing fuel efficiency. The extra boost in power means that the engine doesn’t have to work as hard thus reducing unwanted engine noise in the cabin from revving past 3000 rpms. Buick says that the Encore front wheel drive will achieve 9.3L/100km in a city and 7.2L/100km on a highway which makes it one of the less efficient compact crossovers on the market right now. Add the all wheel drive option and those numbers climb to 9.8 and 7.7 respectively.

Despite its taller driving position, which aids in outward visibility, the Buick Encore behaves like a normal compact car through corners. It’s quick to respond to steering inputs but the steering feel is lacking and it feels a bit too easy to turn. However the overboosted steering does make it easy to maneuver on tight city streets just don’t expect to have a sporty drive outside the city.

Comfort – The interior is typical Buick. Lots of leather with a contemporary design. Actually let me rephrase that leather part, “Lots of leather on the top half of the dashboard”. Everything below the centerline of the steering wheel is plastics from the Chevrolet parts bin. But above that centerline, the leather and soft plastics are pleasing to the touch and to look at. Gone are the plethora of buttons from the first generation of the Encore and replaced by a simple to use 8” touchscreen. Of all the infotainment systems available now, GM’s is probably the easiest to use and to learn quickly. All of the important and most used features are one tap away and different vehicle settings are not buried in the bowels of some obscure submenu. 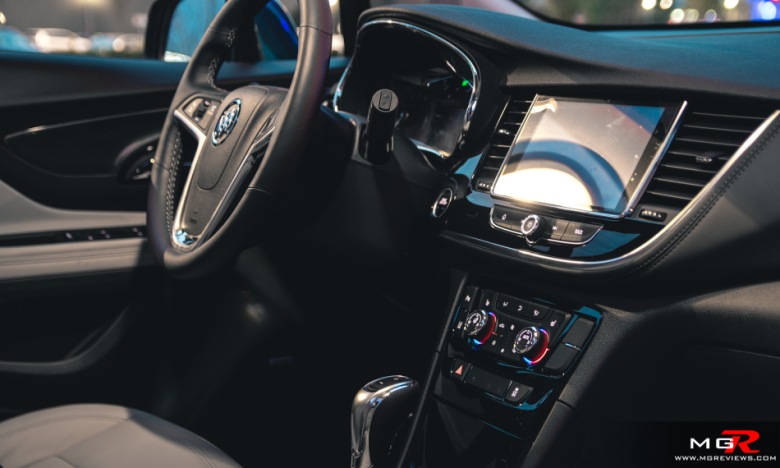 Another plus of the Encore’s interior is the quietness. Buick uses BOSE sound cancelling technology to reduce engine, road, and wind noises from entering the cabin. Front occupants also have a lot of room not only for their legs but also for their top hats. Yes, you could drive comfortably while wearing a top hat. There is a lot of headroom. Rear occupants are not so lucky because legroom is tight for anyone over 6’ tall as is headroom. Cargo capacity is average for this class with less room than the Honda HR-V but more room than the Mazda CX-3 and Nissan Juke. The Encore also has a folding front passenger seat for those extra long items making it a bit more versatile. 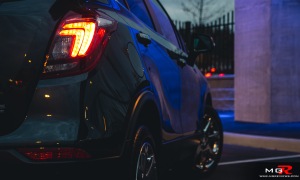 Odds and Ends – Overall the design of the Buick Encore remains relatively unchanged from the previous generation apart from new taillights and a refreshed front fascia. The headlights and grille take inspiration from the Buick Avista concept (which was recently featured at the 2017 Vancouver Auto Show) and it is a look at the direction that other Buicks will take in terms of exterior looks. One plus to the newly redesigned fascia are the new LED headlights. Standard are halogen headlights but the new LED headlights do a much better job of illuminating the road ahead.

Unfortunately the Buick is on the higher end of the price scale. It starts at just over $23,000 CAD while the competition from Mazda, Honda, and Nissan are in the $20,600 to $21,200 CAD range. The only compact crossover that is more expensive is the Toyota C-HR at $24,000. And you’re not really getting much extra stuff for the approximately $2000 or so that you pay. All of the vehicles come equipped with push button start, keyless entry, backup camera, touchscreen infotainment system, and some come standard with heated seats (HR-V & Juke).

So is it worth buying? If you could live with not having all of the bells and whistles, yes. The interior is quiet, getting in and out is easy, and it drives pretty well. But if you do need to have all of the features that are available on higher trim levels, it’s best to go for a mid-size crossover instead.

Thank you to Eagle Ridge GM for providing the vehicle. www.eagleridgegm.com